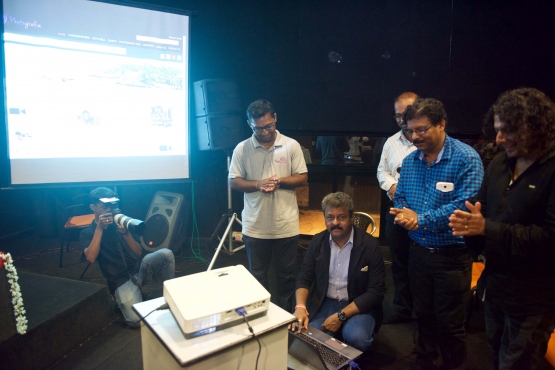 Speaking  on the occasion Shri Karrale congratulated Shri Navdeep Aguiar for his initiative and said that the boy is energetic and eager to take up challenges. The Goan environment is very conducive for photography and keeping in mind the latest technology in the Photography there is wide scope for new entrants in the field.

Complimenting Navdeep for launching the website he said that it was a very good thing for Goa as even in Maharashtra there is no such website.

Fashion Photographer Shri Prasad Pankar said that Navdeep is ambitious and would not leave until the things that are in his mind are accomplished.

President of Photo Journalist Association Shri Souri Komarpant said that photographers are eyes and ears of the society and that they have to be alert 24 hours like a soldier on the border.

Shri Navdeep Aguiar a young photographer and Law Student  in his speech explained his initiative and sought support from the people in his endeavors. Ms. Anjali  Aguiar managed the event.